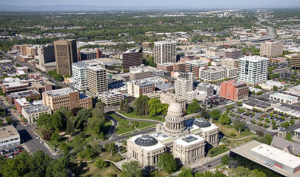 I love Boise, Idaho. I last traveled there in 2006 to assist in the delivery and setup of an entire surgery center, accompanied by my Father. I can’t put my finger on what it is that attracts me to Boise; be it the people, scenery, or something different. It’s probably just a soup of all of the things that I either don’t have in my city, or don’t recognize that I have.Come to think of it, though, it may have been the people I know and met while there. This came ever prevalent when we ran into a problem and needed some help.

The surgery center we were setting up consisted of 3 operating rooms. We were installing surgical lights and uncrating and setting up the rest of the equipment, including stretchers, monitoring, and operating tables. The truck line that we shipped with was late arriving, as the truck carrying the equipment had run into mechanical issues driving up from Salt Lake City. We usually prefer morning deliveries so we can have a whole day to utilize for all the uncrating and unboxing that is required. The surgery center was looking to do their initial case 2 days from our delivery date, so we had a tight window to work with.

The truck ended up arriving later in the afternoon. We unloaded the truck and discovered that the operating tables were nowhere to be found. Panic set in. We immediately contacted our office to make sure that the tables were on the truck. Our staff confirmed that they were. We called our rep with the truck lines, but no answer. We would have to wait until morning to figure out where the surgery tables were.

After a restless night, I immediately began trying again to reach my rep with the shipping company. I explained to him the gravity of not having the tables on time, since the surgery center’s first procedure would be the very next day. He placed me on hold for what seemed an eternity and then said that he was not sure where the tables were and would call me back as soon as he knew something.

The administrator of the surgery center was quite understanding when I briefed him on the situtation, but nevertheless, now he was sharing the anxiety of not being able to perform the first procedure the next day without at least one table. This was something I was trying to avoid, causing him angst, but I felt like it was the right time to prepare, just in case.

In the early afternoon I finally received a return call from my rep. He stated that the tables were left in Atlanta when they changed trucks and were currently on a different truck headed to Salt Lake. The tables would be at least 3 days from being delivered. There couldn’t have been worse news at that moment. One of the most important lessons I have learned in life is to not dwell on things that you cannot change. There had to be a solution.

My father and I took some time to think of different ideas to be able to get the surgery center a table. I had a medical equipment dealer friend I had dealt with for years that was located in Boise. He didn’t always have tables, but it was worth a shot. I called him and told him I needed a huge favor and asked if he had a table I could rent. He said, “yes”. I felt a rush of relief pour over me. I then asked when I could get it. He said they had just went through the table and everything was working good and we could pick it up anytime, even immediately. Immediately was the option we chose.

We borrowed a truck from one of the surgery centers employees to pick up the table. We drove to the dealers  facility and picked up the table and returned with it back to the surgery center. We got it off the truck and into one of the operating rooms. It looks great and worked great, too. The administrator was thrilled that he was able to keep the scheduled procedure on his schedule. We were pretty proud, too, but moreover, we were just so impressed with the people that helped us get through that difficult situation and come together for a solution. You don’t often find people willing to help like that at a moments notice. I guess I kind of fell in love with Boise that day. I like potatoes, too, so that is a plus…